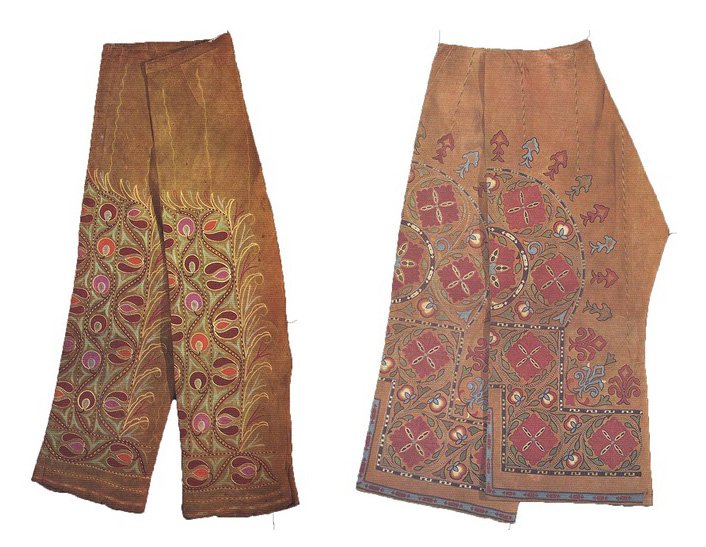 In the 18th century, the top trousers or shalbar were sewn from homespun camel hair fabric and skin. They bore embroidered silk patterns in different designs, the ends quite often sheathed by an ornate band, lace, and edged with fur. Men and women used it as an everyday cloth. Women wore it under “koylek”. 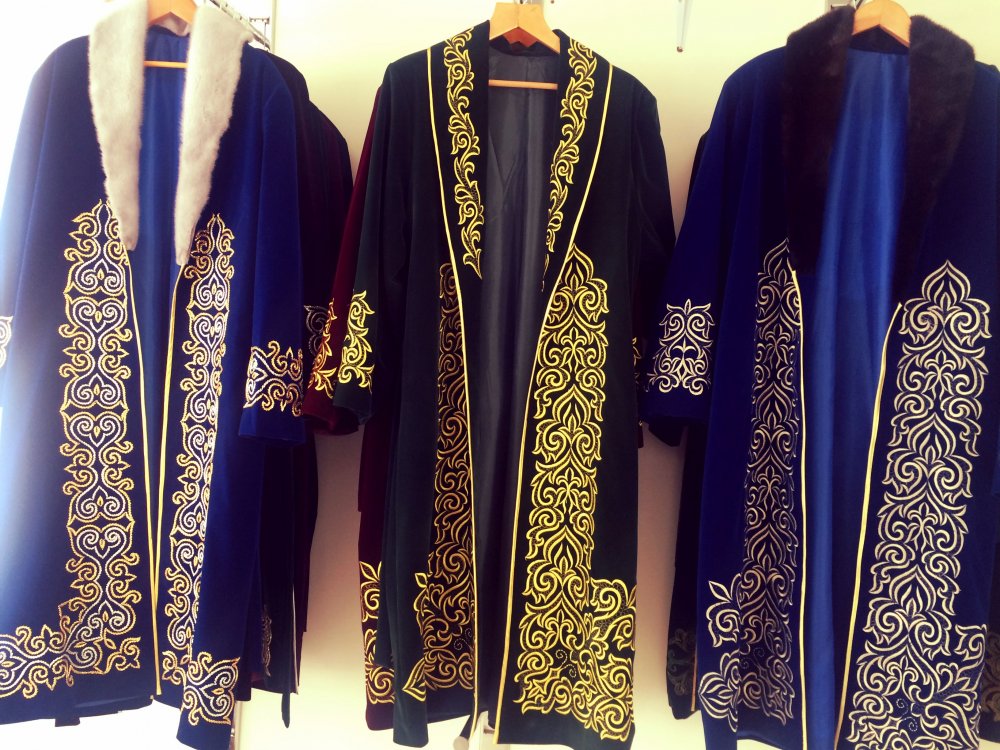 One of the main Kazakh clothing is the shapan or chapan — a spacious long dressing gown. These robes are not as gender specific as other clothes, and both men and women commonly wear them. Shapan is sewn from various fabrics and colors although most often in the main monochrome or dark colors. These are lined with a layer of wool or cotton wool. Festive shapan is sewn from velvet, decorated with applications and gold embroidery. Such a dressing gown was part of the clothing of rich Kazakhs. 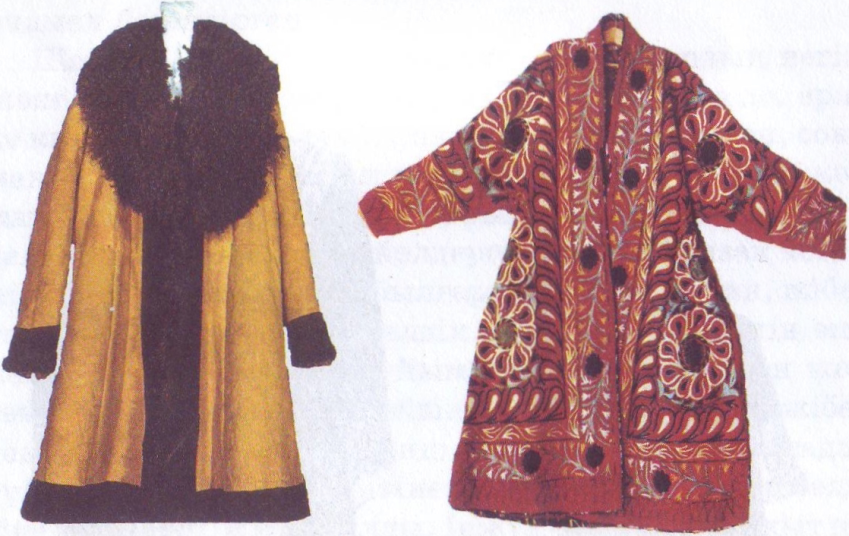 Ton is a common winter clothing for the Kazakhs. Often, but not always, made of sheepskin, they can also be made from raccoon skin («Janat ishik») or silver foxes («kara tulki”). Nobles wore a fur coat that was made from blue cloth and covered and trimmed with the beaver skin called a “kok ton.» Tons are often made by sewing together tanned sheepskins with wool on the inside, and wealthy Kazakhs wear tons made from the skins of four- to five-month-old lambs. 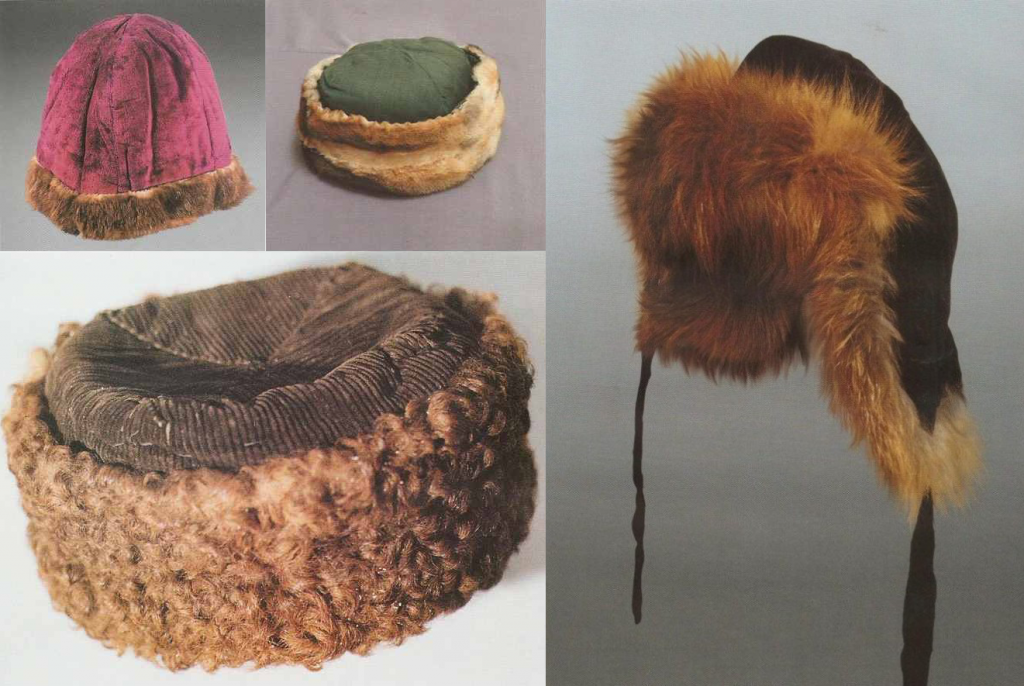 It is one kind of spring and autumn male headdress. Boryk — the oldest word, comes from the word «bora» — a wolf. The wolf is an ancient totem of the Turkic tribes. Headdress is always trimmed with otter fur, sable, lambskin. 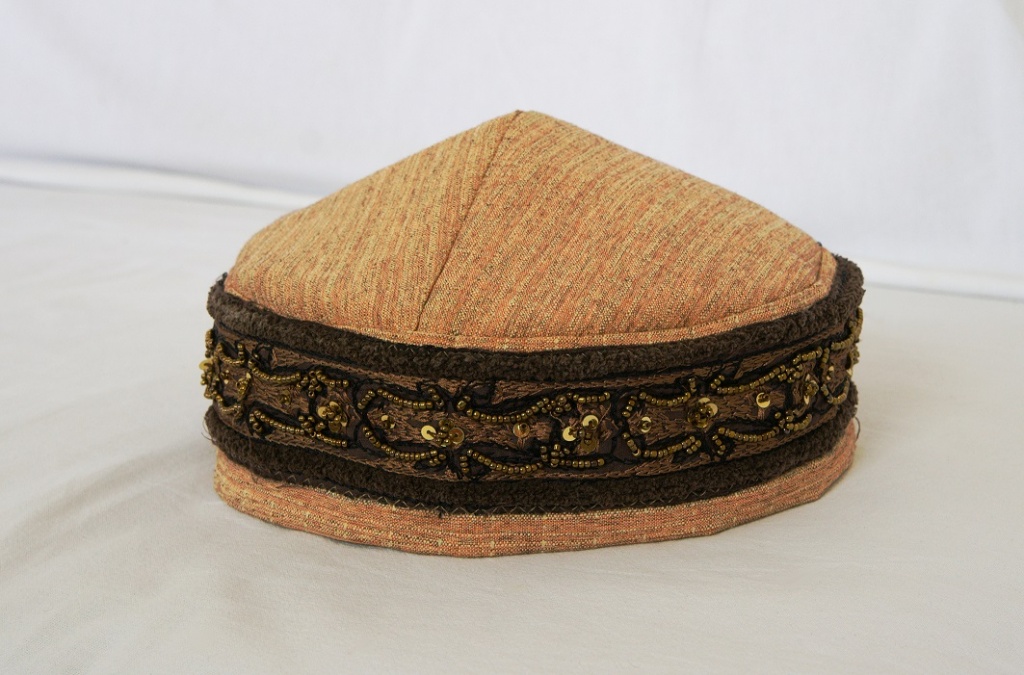 Takiya — is headdress, one of the elements of the Kazakh national costume. The skullcap is a light summer cap made mostly of the velvet. They were lined with fur, decorated with silver and gold braid. Commonly, young man wore tyubeteyka. 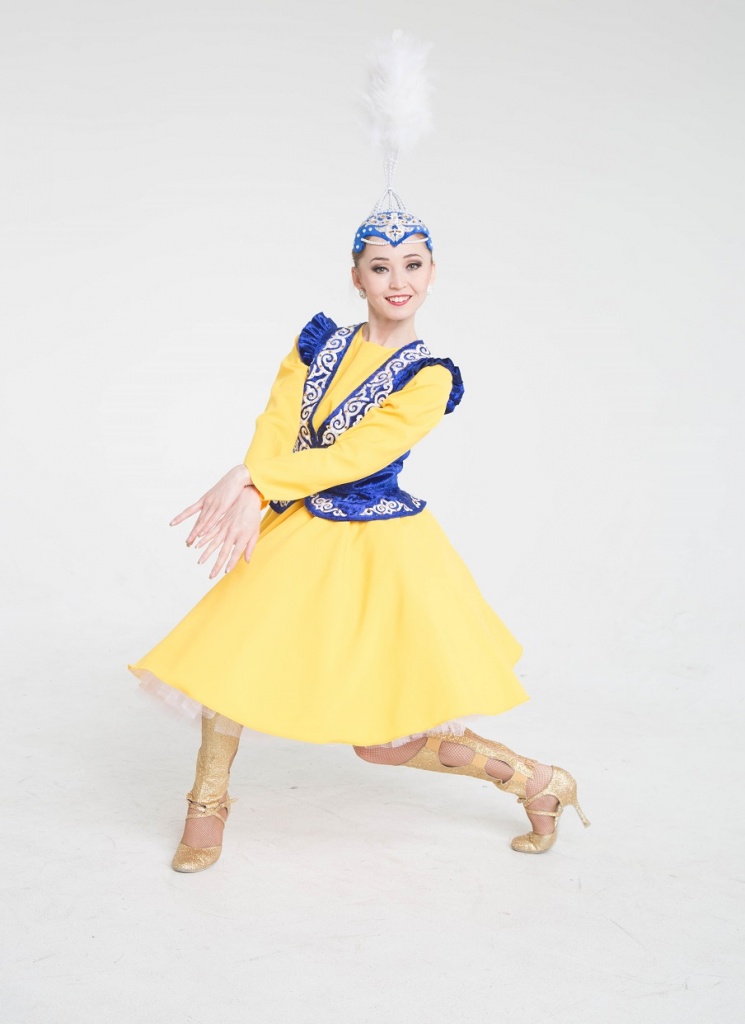 Women wear a shirt-like garment known as a koylek. Different fabrics are used for various purposes, with more expensive fabrics for festival wear, and common fabrics for everyday use. The dress is made by folding an integral piece of fabric in half and sewing the sides laterally from the armpits to the bottom hem.

A kupe is a warm women’s clothing typically made of fox fur, though it may occasionally be made from goatskin. It was used for the winter and cold weather. 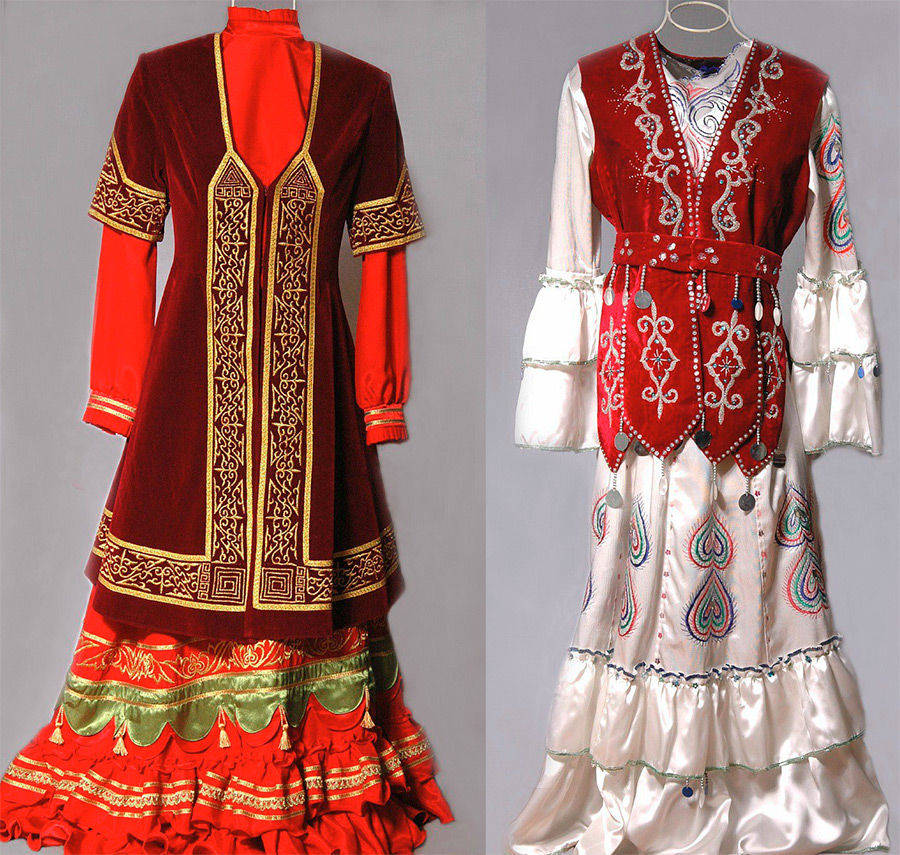 Camisole — easy swinging clothes, sewn on a figure with expanding bottoms. A camisole without sleeves was called “feminine kemzal”, with sleeves — “zhendi kemzal” or “sholak zhen kemzal”. Young girls wore camisoles of bright colors. Camisoles were sewn from monochrome dark fabrics and occasionally from striped or motley fabrics. They had a cloth lining often insulated by a thin layer of wool. 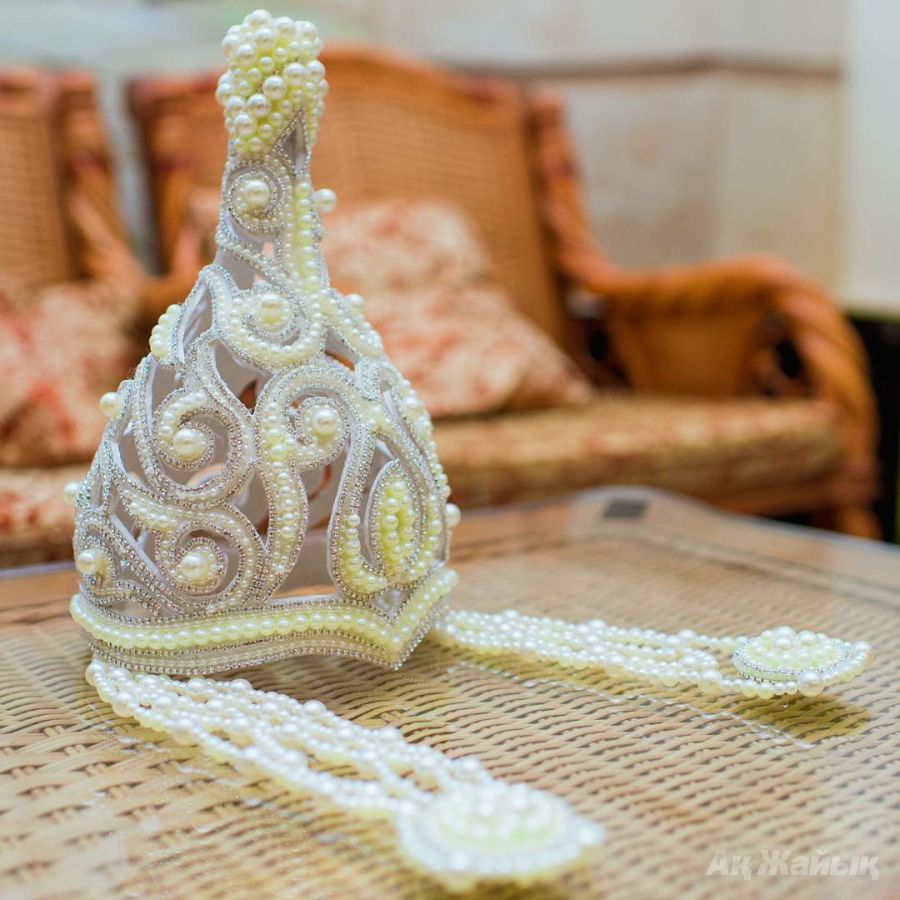 Kazakh women’s national bridal headwear, which is a high (70 cm) conical hat, is of particular importance. The most expensive of them were evaluated in a hundred selected horses. Saukele was a mandatory part of girl’s dowry, and was prepared long before the girls reached the age of marriage. Bride was supposed to wear a saukele during the wedding ceremony, and then it was worn on holidays for some time after the marriage. 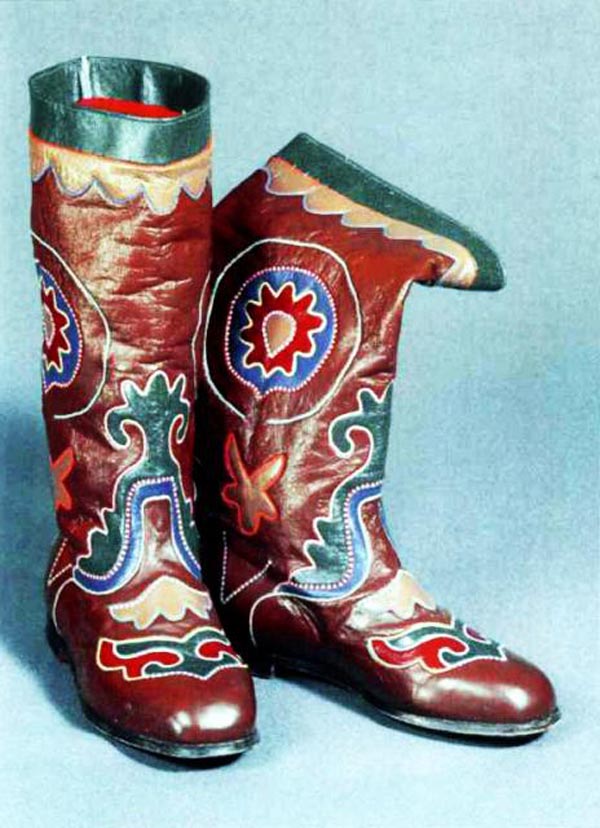 In old times men’s and women’s footwear were also similar, though girls’ boots were often decorated with embroidery and appliqué work. Footwear differed according to seasons. For example, winter boots were tall, broad-shafted, worn over the felt stockings. In addition, there were differences between footwear of older and younger people. Young people often wore boots with high heels (up to 6 — 8 cm), older people – with low heels. Another common type of footwear among Kazakhs was light boots without heels, tight fitting on legs, called ichigi or masi. Leather kebis was worn over them, which was supposed to be put off at the entrance to the house. 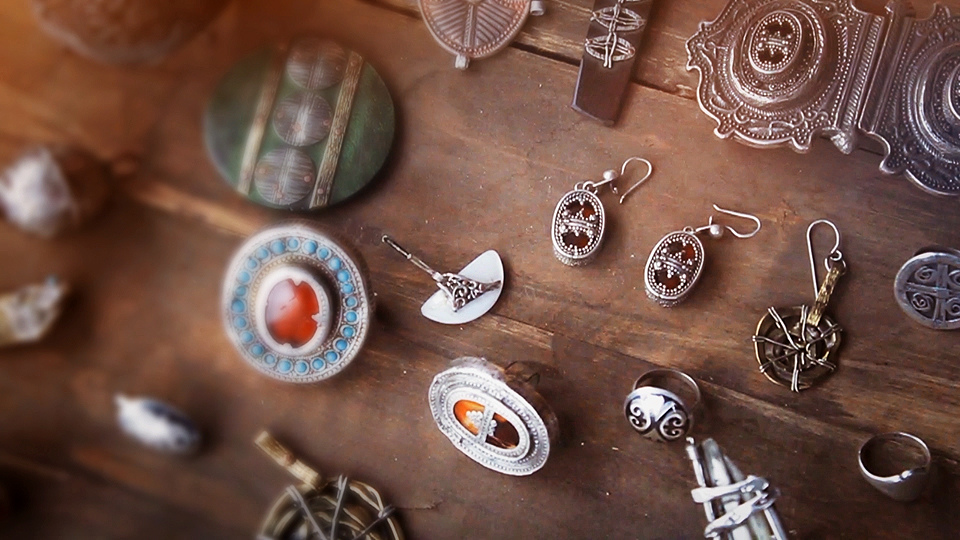 Different decorations as applications, patches were used on clothing, headwear, and footwear. Coral, pearl, colored glass were used to decorate gold, silver, copper, bronze jewelry of women. Earrings, flat and wrought bracelets, rings had national ornaments as flowers and beautiful patterns. Belts — a compulsory element of both male and female clothing. It was ornamented with embroidery, silver badges were sewn on it. Types of jewelry usually depended on age, social and marital status of those who wore them. Some of them were typical for certain territorial groups.